Set the first day of the week – you choose

Different countries have different ‘first days of the week’. In Europe the first day of the week is considered to be Monday, in the US and Japan it’s Sunday and in some middle eastern countries it’s Saturday.

Currently, in 2016, the weeknumbers in the US and Europe are not in sync. The week that is considered to be week number 5 in Europe is week number 6 in the US.

If you are not sure what to choose just follow these standards:

Monday: EU and most of other European countries, most of Asia and Oceania
Saturday: Much of the Middle East
Sunday: Canada, USA, China, Japan, Israel, South Africa, most of Latin America

When you start working on a new chart the tool will do the desicionmaking for you. It will make a best guess of the proper timeline setting based on your ip-address. 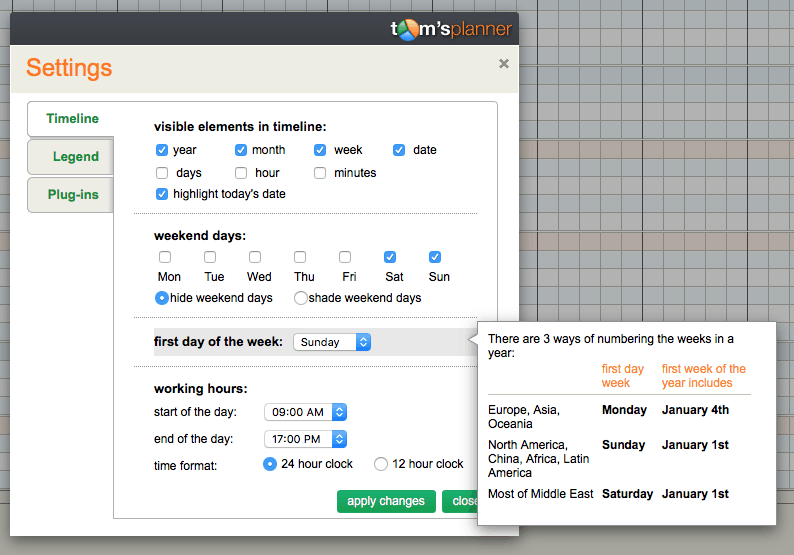 WHAT IS TOM'S PLANNER?

Tom's Planner allows you to create and share Gantt Charts online with "drag and drop" sim­plicity. It is very user friendly and gives control back to the project man­ager. It's easier than MS Proj­ect & faster than Excel.

Join 178,117 customers and have your first
Gantt chart live today!

The free Personal account allows for only one chart. Professional and Unlimited accounts, allow for multiple charts and allow you to print, export and share your charts online. For more details click here.